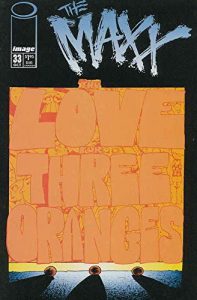 The comic series The Maxx, by Sam Kieth, was a major inspiration for the game In Dark Alleys, and especially the parts of the game dealing with psychodynamics and the subsconscious.  This post analyzes some of the references within Issue 33.

This story line takes place circa 2005 (see Maxx #21). Mr. Gone is supposedly dead by now, having been only the dark identity (or Shadow) of Artimus Pender.

Mickey and Dude Japan first appeared in Friends of Maxx #1, which told the story of the turbulent relationship between Mickey, a tow truck driver and Dude Japan, a starving artist who reproduces children’s art with crayons. Although they are together in the end of Friends of Maxx #1, it is never entirely optomistic. “You still annoy the hell out of me and visa versa. I still don’t get enough sex and you can’t get enough love.”

Possible womb metaphor. Sam Keith takes special pains to let us see that they are going in the pink room, where they stay a bit, then they are removed.

Uncle Freddy is described as “Pure Shadow… he plunged deeper in to his dark half and never came up… that’s why he knows stuff we don’t!”

Swiss Psychologist Carl Gustav Jung, who’s work was based as much on occultism and mysticism as science, came up with the theory of archetytpes. Archetypes are parts of ourself that we deny and form a sort of seperate existance within ourselves, meanwhile becomming the template by which we judge anything that meets those qualifications. For instance, for men the Anima is the supressed feminine side. It becomes the basis for a model of females and is projected as a template upon all females the male perceives.

The Shadow Archetype represents the totality of that which a person has pushed back as being abhorrent to self. Although evil impulses may be part of what is put in to the shadow, it can include any impulses or personality elements that, for whatever reason, are pushed back in to the subconscious. This may include childish, self-destructive, megalomaniacal or other impulses.

The several references in the comic to eating one’s own feedback or their own shit seem to suggest a need to reincorperate the shadow in to selfhood to reach one’s full potential. In this case in particular, Uncle Freddy wants to know what happened to Mickey and Dude at a party a few years back.

Music Cue: Prokofiev’s “Montagues and Capulets From Romeo and Juliet.”

Much of what Uncle Freddie says seems to be based heavily on the expositions of Raleigh Theodore Sakers, a mental patient who’s rantings were recorded by a member of the band Sublime and presented, in three parts, on their album “Robbin the Hood.”

Raleigh’s word salad (the psychological term for speech which has the pattern of meaningful speech but if the words themselves are examined they have no particular meaning) seem to evidence that he is Schizophrenic. During some of the recording, Raleigh seemed to believe that he was helping with the creation of a science fiction magazine. At another point he seemed to think he was making a commercial.

Raleigh: “We’ve got you in this fuckin movie to exterminate all the lunatics all at once with a filtering system of God.”
Uncle Freddy: “I’m the filtering system of god. Pure intelligence. Jeepers- the aboriginies know there’s nutrition in your shit!”

Raleigh: “See, you lie. You don’t eat your feedback.”
Uncle Freddy: “Eat us, or you’ll drown in your own feedback!” 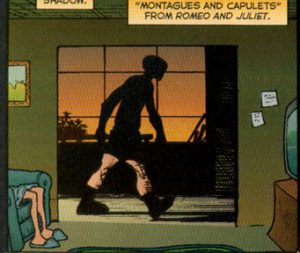 Uncle Freddy says (it is not clear whether he is saying it to Micky and Dude or Maynard) “Yer fuckin semantic blockage!!! See? You don’t eat yer feedback!”

“Semantic Blockage” was a term coined by psychologist Korzybski who said in his book Science and Sanity that semantic blockage is “any ‘thought’, ‘feeling’, attitude, belief, act, etc. that blocks … our ability to evaluate our evaluations.” Semantic blockage interferes with a person’s ability to bring the human nervous system in line with it’s full capacities. 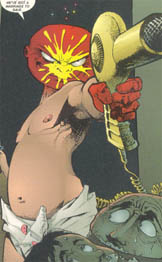 Synopsis: As Dude & Mickey lay helpless, three organges march by playign a horn, a drum and another horn. They circle around and go back through the door they came in through.

Uncle Freddy with red warpaint on his face and hands and a yelow splotch in the middle of his face. Colored dots glow right above his head (could be something in the darkness behind him).

“The Love for Three Oranges” is an opera by Rusaain composer Sergei Prokofiev. It was in turn based on an eighteenth-century comedic play by Italian playright Carlo Gozzi. The Opera first premiered in 1921.

The story is of a king who is ready to retire and turn his kingdom over to the prince only to find that the prince is sick with violent headaches, back pains, heart palpitations and nightmares. Top physicians are called in and proclaim that the illness is psychological (they use the term “all in his head”) caused by too much stress being placed on the boy as future king. He has spent too much time being a prince and not enough time being a boy. The king is told that the only way the boy can be made well is if he laughs.

After several tries which are rejected by the bitter and humorless boy, the boy eventually laughs at the accidental misfortunes of an old woman. This old woman turns out to be a powerful witch (Fata Morgana) and puts a curse on the boy that he should fall in love with three oranges and he must ride three thousand miles to find them and he will never be happy until he does.

The curse takes effect immediately and the boy figures he knows where the oranges are, at the castle of a giantess. He rides there immediately and after distracting the giantess with a magic bow he says will make her beautiful, he races to her kitchen and rescues three giant oranges.

As they travel back through the desert, the court magician warns him not to cut open the oranges unless he has water ready, but in his desperation he opens one. In it, he finds a beautiful princess begging for water. To try to find water he opens the second one, also proclaiming that she will die if she does not get water. The two princesses, having no water, dissapear. Desperately, the prince opens the third and finds another princess but before she dies of dehydration, the court magician appears with a bucket of water and saves the couple. She agrees to marry him.

Upon returning, the prince goes ahead to fetch a beautiful dress for his fiance to wear to court. While he is gone Fata Morgana turns her in to a rat and places one of her servants in the princess’ place. Although the prince is not fooled by this deception, the father is and promises to make his son stick to his promise to marry the girl. The court magician appears again to save the day by returning the real princess ot her original shape. The two marry and live happily ever after.